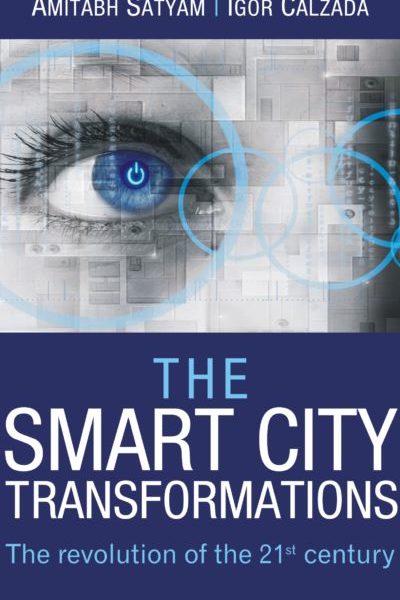 Developing smart cities is a pivotal and high priority task of modern-day governments all over the globe. Not trying to fall behind in the race to advancement, regimes have ensured that the manifesto of every political party has a smart city under their agenda.

Smart cities enhance the quality of life, which amplifies the desire of citizens to lead an improved and a good quality life. This aspiration of public puts countries under pressure to continuously upgrade and provide best quality life to its citizens, while keeping in check to not exterminate the natural resources, and to use the available resources in a smart way.

As the global population is increasing, the world must move forward, and should move towards smarter use of resources.

‘The Smart City Transformation’ is a book written by Amitabh Satyam and Igor Calzada which talks about every feature of ‘Smart’. It deals with every aspect of becoming a ‘smart city’ and elucidates the structural framework of the concept.

The basic mindset behind the book lies within the statement written in the book ‘smart means doing more with less resource.’

It explains with great patience the expectations from a smart city, ideas of what is smart, need of such a city, components of such an ecosystem, political, social and government aspects, framework for the transformation, the financial aspect of the smart city framework and most importantly – the problems faced while developing a smart city.

The book is divided into six sections, and each section deals with above mentioned topics in a simple yet elaborative way. It also provides its readers with some successful examples of smart cities all around the world.

Some of the most important concepts that are used to design the framework of smart city and to improve the quality of life are Health, Education, Transportation, Energy, Waste Management, Sanitation, Electricity, Safety and Water are explained in the book.

The authors first recognise problems faced by public all over the world both in developed and under developed countries alike and then provide solutions to the issues.

Satyam has broadly classified five features that all smart cities must aspire for, which are-

Enhance and extend life – relates to the sustainability of life

Affordability – average citizens should be able to afford Smart solutions

Some of the important highlights of a smart city are:

According to the authors, for a smart city to be successful, people must be tech savvy and should have knowledge of how a smartphone works.

For a smart city to work, everything must be electronically monitored by adding sensors and almost everything should be connected via ‘Things’ which will watch and measure data generated through sensors for smooth functioning of the city.

For Security purpose ‘sensor network’ should be established like facial recognition, voice recognition, chemical sensing, heat sensing and a variety of other sensors to have a smooth life.

For improving education, books must be replaced with smart devices and everything should be electronically managed.

For energy management the authors suggest that there should be no light switches or water taps in the city – they should be replaced by motion sensors, which will reduce water and electricity consumption by 40%.

Even for medical purpose machine and connections must be established using technology, so that a medical expert can use robots and telecom connectivity to perform surgery even after being thousands of miles away from the hospital.

In the financial segment the authors write that either the government should invest one time and later use tax from people to overcome the expenditure. Alternatively the government could also hire third part to construct a smart city for them.

Masdar City of Abu Dhabi on the smart cities was constructed after government spent approximately US$ 1.6 billion for around 40,000 people to live in that city.

However, these initiatives will help the aspirants to understand the difficulties that they might face on their quest for living in a smart city.

Satyam and Calzada have divided the book into six sections which are spread over fifteen chapters. The entire text is written in bullet form, which makes it easy to understand but an exhaustive reading as reader tends to get overwhelmed by excessive number of bullet points. The language used by them is easy and straightforward. General readers might not find this book interesting. The authors have done great job in explaining the concept of smart cities to audience.

The concepts of smart cities that are mentioned in the book may not resonate with the largely rural landscapes of the Third World. Countries which lack technology and are solemnly depended on orthodox techniques will find concepts of the book unrealistic.

Smart cities in India have a long way to come, but at least the nation has taken a bold step forward in the right direction.